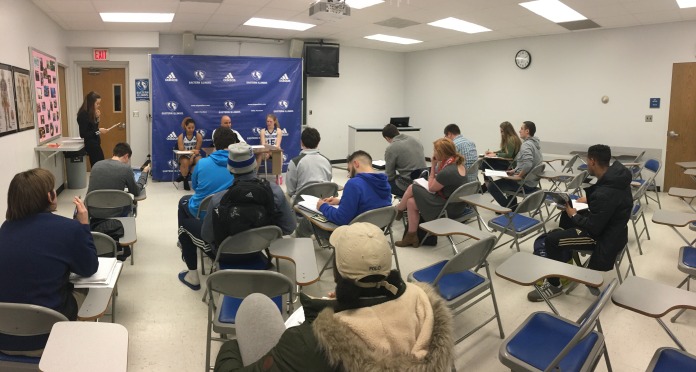 EIU women’s basketball coach Matt Bollant and two of his players address the media, and my students, after a game last week. These experiences are invaluable for sports media students.

You can grill students all you want on interviewing techniques, keeping score, taking notes and writing game stories, but they won’t really learn until you throw them into live event coverage.

Everything makes sense until one has to cover a game on deadline.

That’s how I received my baptism into sports journalism at age 17, covering a high school football game on a muggy September night in Fort Myers, Fla., for the News-Press. I had dabbed my foot into the Jordan the previous few years by writing for a weekly newspaper in Coral Springs, on the state’s other coast. But those short pieces were mostly summaries of action written several days afterward at a more leisurely pace.

Nothing tests your faith in your journalism skills like covering a high school football game on deadline where one has to rapidly take notes, quickly tally stats, rush over to coaches and players before they leave the field, speed back to the office and then stare at a blank screen. Or, in my case, a blank piece of paper on an electric typewriter because no terminals were available in a sports department already buzzing with perhaps a dozen people working on deadline. I struggled to write the perfect opening line, eventually dashed off some mediocre prose and then sat, stricken, as an editor revamped my story, which he had typed onto a computer. Way too many of my green words soon disappeared from the black screen, prompting hot flashes and profuse sweating. By the time the editor finished working my story, I realized that I was not cut out for sports journalism. But then this editor said something odd and magical: Nice job on the story. Keep up the good work. See you next week. I heard this mantra for months afterward from several different editors who reviewed my work. These kind words inspired me to work even harder to avoid making the same errors each ensuing week. Eventually, these editors deleted fewer of my words and I sweat far less (at least, in the news room.)

Make sure to contact your sports information director at least a few weeks before assigning this class coverage, just as a reporter would do so to request credentials.

At these games, students sit together in the bleachers since there are not enough seats on press row. Plus, I do not want students to interfere with working media who would be distracted when students asked questions or when I offered unsolicited advice. I also use social media to offer additional reminders through the game, using a hashtag (#JOU3706) that is not otherwise populated.

At the start time of a basketball game, you’re looking for trends and describing plays that might help define the game. Otherwise, very little play-by-play in 1st half typically gets inserted into game coverage. #jou3706

At halftime, review stats for statistical trends, outliers and potential angles. Maybe even write a few graphs as if the game has concluded. You might later insert this info at the end of your gamer. Plus, it will force you to put the half in context. #JOU3706 pic.twitter.com/gvj4TbvUYt

Entering 4th quarter, start thinking of potential questions. For example, @EIUWBB switched to man coverage in late 1st quarter. Could ask the reason for that, as suggested by @Eiu_Journalist. Jot down 1-2 questions during the next TO. #jou3706 pic.twitter.com/t8nJcjjRRv

After the game, students attended the press conference with the coach and two players. I encouraged them to each ask at least one question.

We are fortunate to have wonderful coaches on our campus who understand the educational experience for both students and players. EIU coach Matt Bollant later said he appreciated his players getting to speak in front of a larger group. Typically, only the Daily Eastern News and Charleston Times-Courier cover home games.

Ultimately, students learned, struggled, succeeded, failed – and maybe even endured some warm sweats – during and after the game. Several students were too timid to ask questions in the press conference, and nobody took nearly enough notes. But they all submitted game stories on deadline, which was the most essential part of this process.

I evaluated these stories the next day, inserting suggestions and edits in Microsoft Word that are more expansive and legible than anything I used to offer in handwritten form.

Here are a few examples where I addressed ledes, structure, language and many other elements that become more relevant after having covered a game live.

We’re going to cover an afternoon baseball game later this month, which should be a little easier since the pace of play is slower. But that doesn’t mean they won’t struggle, nonetheless. But it’s OK. That’s just part of the learning experience.