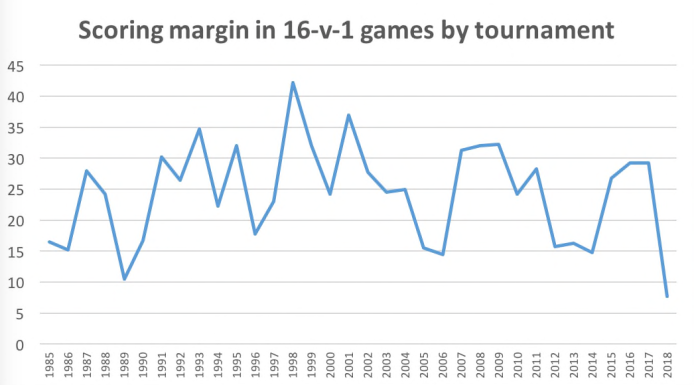 NCAA.org offered a nice analysis detailing trends in these No. 1 vs. No. 16 matchups.

So how did the country cover No. 16-seeded UMBC’s implausible, crazy victory over No. 1 Virginia? Here’s a sampling of the stories that addressed what might be the biggest upset in the NCAA basketball tournament – and the first time a No. 16 seed has ever beaten a top-seeded team. Few fans had ever heard of the school, making its second appearance in the tourney. After the historic game, they crashed UMBC’s website trying to learn more about the little team that did.

In another upset that is equally shocking, Virginia’s student-run newspaper, Cavalier Daily, did not post anything on its website, Twitter feeds for news or sports, or on Facebook. UMBC posted a story both online and offered updates on Twitter – although no social media may have been more entertaining than the tweets from UMBC Athletics.

Check out these stories

From the Associated Press:

So how do you top winning your conference tournament on a buzzer-beater 3-pointer? Well, knocking off the No. 1 team in the country by 20 points in the first round of the NCAA Tournament should do it.

UMBC’s magical season rolled on Friday night when it throttled Virginia, the tournament’s top overall seed 74-54 to become the first 16 seed to upset a No. 1 in the history of the men’s tournament, a victory that set the sports world ablaze and easily ruined thousands of brackets.

From the Baltimore Sun

You feel the frenzy building, rising, the hysteria of 135 failed versions finally bubbling over.

No. 16 seed UMBC was going to beat No. 1 seed Virginia, the first such occasion in the history of men’s college basketball.

That sentence has to be typed, just to make sure it actually happened. This was no far-fetched dream. It was no longer some hypothetical what-if scenario.

No – what happened inside Charlotte’s Spectrum Center on Friday night, a 74-54 Retrievers victory, will live forever.

From the Cavalier Insider (Daily Progress)

CHARLOTTE, N.C. — The foul was one final act of desperation for Virginia forward Isaiah Wilkins to try and will a comeback, down 17 points, prolonging the merciful and inevitable ending. Wilkins began a slow walk past center court, his head hanging below his shoulders. He stopped before dropping his hands to his knees, pausing in the moment to acknowledge the end had come.

It was his fifth and final foul, the final act in his college career, and the final stand for Virginia team that toed the line of perfection for four months. The unbelievable shock of seeing it all crash down in the greatest upset of the sport’s history.

UMBC became the first No. 16 seed to win an NCAA Tournament game, and it blew out No. 1 seed Virginia, 74-54, in a game that will forever be an infamous stain on a historically great UVa season.

CHARLOTTE — Virginia was on the wrong end of the most improbable upset in men’s college basketball history Friday night, falling to Maryland Baltimore County, 74-54, to become the first No. 1 seed to lose to a No. 16 in the NCAA tournament.

No. 16 seeds had lost their previous 135 games to No. 1s since the tournament expanded to 64 teams in 1985. The Retrievers ended the streak in the South Region at Spectrum Center, and they did so convincingly, turning a close game against the top overall seed in the tournament into a second-half blowout.

From the Sporting News:

The mood in the Virginia locker room was exactly what you might expect less than 20 minutes after the team’s historic upset loss at the hands of the University of Maryland-Baltimore County on Friday night at the Spectrum Center — the first time in NCAA Tournament history a No. 16 seed knocked off No. 1.

Isaiah Wilkins and his Cavaliers teammates sat heartbroken with tears in their eyes. Devon Hall and Jack Salt looked flat-out stunned, not knowing what had just happened to them or how it had happened. At one point, all Wilkins could muster was an, “I don’t know, man.”

One thing that appeared clear to every Virginia player was that they were simply outplayed. And it may seem too easy an explanation, but for a top-seeded team facing a No. 16, that’s something that isn’t supposed to happen — and never has before tonight.

From UMBC’s school newspaper, The Retriever

UMBC made history on Friday night, as they became the first 16-seed in the history of men’s college basketball to beat a No. 1 seed in March Madness.

Remember the date March 16, 2018: The day the the University of Maryland-Baltimore County and the University of Virginia made history. They made it together and in doing so they changed the NCAA Tournament, the greatest event in sports, forever.

UMBC, the No. 16 seed out of the South Regional, pulled off the biggest stunner — and now the most memorable upset — in the chronicle of the this glorious sporting event with a 74-54 victory over the No. 1 overall seed.

From the Richmond Times-Dispatch

March has never been madder.

The University of Maryland Baltimore County became the first 16-seed to ever upset a 1-seed, taking down Virginia, the NCAA tournament’s overall top seed, 74-54 Friday night in Charlotte.

From the New York Times

They played loose and fearless, simply because they had nothing to lose. A No. 16 seed had never beaten a No. 1 seed in the N.C.A.A. men’s basketball tournament. Who would ever think that the tiny University of Maryland-Baltimore County would be the ones to break through?

Certainly not against Virginia, the top overall seed, a two-loss team that had handily won the nation’s toughest league — the Atlantic Coast Conference — and its conference tournament.

But the N.C.A.A. tournament is different. The Cavaliers carried all the pressure; the Retrievers none of it. And they rode that carefree wave of insouciance to what might have to be considered the greatest upset in college basketball history.

This one was for Princeton, East Tennessee State, Western Carolina — all the No. 16 seeds that had come close to upsets as the biggest underdogs on the biggest stage. Since 1985, No. 1 seeds had advanced at least to the second round 135 consecutive times. Virginia, playing only a few hours from home, would become the first to fail, 74-54, at the Spectrum Center in Charlotte.

Did the data predict UMBC’s historic win over Virginia? Have 1 seed vs. 16 seed games been getting closer?

No. 16 seeds had tried 135 times. And 135 times, they had failed. Then the University of Maryland, Baltimore County Retrievers played the game of their lives on Friday night, and altered college basketball history.

UMBC — who? — shocked No. 1 overall seed Virginia in the first round of the NCAA tournament, 74-54, a score that sent shockwaves throughout the sport, and throughout the sports world as a whole. It busted brackets and opened up paths to the Final Four in San Antonio.

CHARLOTTE — For the past 34 NCAA men’s basketball tournaments, for 135 games, it had been the unassailable task. As crazy as this event can be, a No. 16 seed had never beaten a No. 1. It could not happen. It was more likely that Bigfoot would meet you for coffee, or D.B. Cooper would send you a Christmas card.

Zero wins, 135 losses. Only the Washington Generals could feel more inferior. Every year, the question came up: Could a No. 16 ever win? Every year, the thought was shot down before you could count to 16.