I teach processes more than anything. Today, I sent students an assignment that involves them taking the first step toward developing and writing a sports feature. Along with observation and interviews, research is essential — perhaps even more so in the germination process.

An EIU professor, faced with the daunting task of teaching students how to write leads for game stories, was stymied when his class defeated him in all four assignment submissions Monday night in Charleston.

I’ve assembled a list of sports writing exercises and handouts for those needing additional material as we all move to teaching online for the next several months. Feel free to use, share, adapt – whatever works to help you educate students. If you would like to share your own exercises, please send them along. I will post your instructions, your name and your college/media for full credit. I’m hoping this can serve as an archive for sports media education.

Don’t let coaches intimidate you from asking questions. If you believe the biggest controversy revolves around whom will start at quarterback, then ask about that scenario — even if the coach becomes agitated, surly or even angry, as Tide coach Nick Saban did here.

To Saban’s credit, he apologized. Likely, some coaches will also offer a mea culpa, if you regularly cover a beat (or if the response is well publicized).

Coaches have the power to eradicate such questions by either responding candidly or by making a decision on, say, who will be the starting quarterback. They just need to realize that transparency will set them free.

Seems as though everybody is focused on whether sportswriters are mostly liberal – as if it matters.

Bryan Curtis, an editor-at-large for the Ringer, has sparked discussion on  whether sports writing has become a liberal profession. The attacks by the president and the alt-right on news coverage have clearly spilled over.

END_OF_DOCUMENT_TOKEN_TO_BE_REPLACED

I recently Tweeted out further suggestions on ways to write more precisely and accurately about sports. I have posted those below.

END_OF_DOCUMENT_TOKEN_TO_BE_REPLACED

Once upon a time, someone somewhere used a new word or phrase to describe something related to sports that was creative, illuminating and/or humorous. Through the years, that word became embedded in sports journalism’s lexicon, used – perhaps, tirelessly – numerous times. So should this word be considered a cliché, a worn phrase or just another vocabulary word, no different than other parts of speech? At what point should writers eschew such words and phrases?

END_OF_DOCUMENT_TOKEN_TO_BE_REPLACED

College teams are already training and scrimmaging, weeks ahead of another academic year. So now is the time to plan your college media’s sports coverage – that is, if you have not already done so. (It’s not like every single event is not already scheduled and available on your school’s athletic website, right?) Planning enables staffs to be more creative, more engaged and more relaxed. Below are 10 tips for improving sports coverage across any media, which are excerpted from the second edition of the Field Guide To Covering Sports, which will include the expanded list when the book becomes available in Winter 2017. The new edition dives even deeper into social, digital, and mobile sports media, and the Field Guide greatly expands coverage of sabermetrics/analytics, Fantasy sports, ethics, broadcasting and visual storytelling. Plus, there is a chapter on covering a college beat.

END_OF_DOCUMENT_TOKEN_TO_BE_REPLACED

This is the new(er) look of game coverage: a package compiled by a writer typically watching an event away from the venue and who relies more heavily on advanced metrics, video and social media instead of on play-by-play and post-game interviews. You’ll also notice that visuals (metrics charts that appear more like daily stock market charts), video clips and social media screen shots play as big a part in presenting this story as words do. To learn more about advanced hockey metrics, you might want to start here.

You’ll also need to learn to break down action on the ice, as SB Nation’s Pat Iverson did below. To improve your ability in assessing play, you can chat with high school/college coaches and players, asking if they’d be willing to meet with you to explain – even off the record – aspects of the game. If you’re lucky, you’ll also be able to sit in when they break down game video. 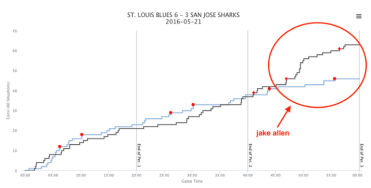 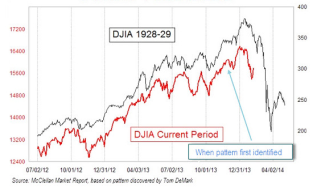 Value picks. Understanding advanced hockey metrics (left) can get as complicated as evaluating ebbs and flows in the stock market (right).

Anybody who works as a journalist realizes there are essentially two kinds of stories – those that either pass or fail, that either inform and/or entertain readers fully or that lack depth, sources, context, skill. Anybody who teaches journalism realizes we can’t really grade in this manner. To that end, I typically create rubrics for courses that address advanced reporting, sports writing and feature writing in order to offer more specific instruction on how to improve. Rubrics can remind students on the elements included in good journalism.